Letters from a Skeptic 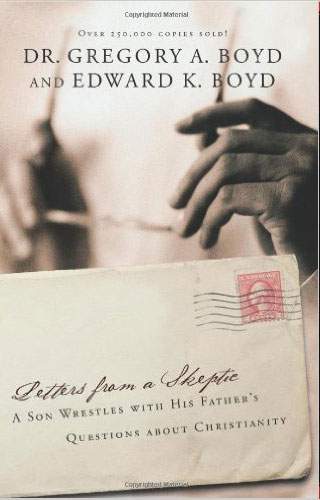 Purchase Letters from a Skeptic

Letters from a Skeptic: A Son Wrestles with His Father’s Questions about Christianity

Greg Boyd is an apologetics professor at Bethel College. When he became a Christian, his father, Ed, thought he had joined a cult. For fourteen years, Greg tried to talk to his father about Christianity, with little success. Then, in what he saw as a last ditch effort, Greg invited his father participate in a dialogue through letters in which Ed could express all his doubts and questions and Greg could attempt to answer them, and prove the validity of his own views. To Greg’s surprise, his father agreed. This book is the collection of those letters.

Who is this book for? It has a wide potential audience. Its a great example of the power of apologetics, and could be used in a classroom setting to stimulate discussion. Its also a hopeful example for those who have loved ones not yet saved (Ed became a Christian after three years of dialog with Greg). But its also valuable for people who are already Christians, on two fronts. One, its helpful for those seeking answers to questions provided by friends and loved ones. Two, its a wonderful exposition of basic Christian beliefs, and can help believers strengthen their faith.

Satan and the Problem of Evil

Predestination & Free Will
Scroll to top